The Church of the Holy Spirit at Rye Harbour was opened in 1849; the build cost was funded by a rich land owner from Fairlight, William Drew Lucas Shadwell and his wife who wanted to bring some Christian order to the village. Since Rye Harbour falls within the parish of Icklesham the first vicar Reverend H W Churton was shared with Icklesham Church and travelled to Rye Harbour periodically.

The Vicarage was built some 50 years later in 1901 to allow for a resident vicar to move in to the village and give the locals the spiritual support that some felt was needed in the turbulent, impoverished times. This build was to be once again financed by Mrs. Lucas Shadwell who was very active in improving the conditions for the villagers.

The Old Vicarage stands on a site that was previously a hole having been excavated by a local company for material to build up the embankment used for the Tram Way. In the hard winter of 1901 when all fishing and boating activities were at a standstill Mrs Lucas Shadwell paid the local fishermen 2/6 a day to fill the hole with mud and stones from the mud flats to enable the building of the vicarage. The first vicar, the Reverend Montagu Manning took up his duties in 1903.

In 1927 following a number of former vicars the Reverend H Newton was inducted into the parish, he was to become an historic vicar within the village on two counts.

Firstly it was he who had to spiritually support the village after the Mary Stanford lifeboat disaster. This occurred on 15th November 1928, following a distress call from a stricken vessel. The Mary Stanford lifeboat was launched in appalling conditions to respond to a Mayday call. Unfortunately the conditions were too rough for the boat and 17 brave souls lost their lives trying to respond to the call. The crew were all village men and all the families within the village were affected by this tragic loss of life, many families losing more than one family member.

Secondly his daughter Monica le Doux Newton went on to become the famous childrens’ author Monica Edwards. Monica grew up in the village and loved messing around in the harbour in her teenage years. She met a local man Bill Edwards and got married two days after her twenty first birthday. They settled in Thursley where she went onto write many successful books. The Marsh series is set in the fictional village of Westling, based on Rye Harbour, with the main character in the series, Tamzin, being the daughter of the village vicar and living in the Vicarage.

During the 2nd World War the vicar at the time left and services at the church were carried out sporadically by the vicar from Rye or army chaplains billeted in the area. At this time the village had many service personnel staying in some of the empty houses and the Vicarage was used by the NCO’s who were commanding the locally based soldiers.

In 1946 the Vicarage was returned to normality after the Servicemen had demobbed from the area and the Reverend Jason Battersby was inducted back into the church by the Bishop of Chichester. The Vicarage continued to perform its role as home to the incumbent vicar until 1971 when it was sold by the church into the private sector.

A perfect blend of Victorian character and modern styling with a few luxuries thrown in. 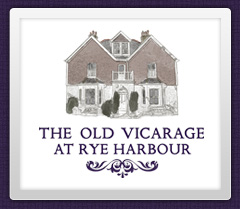